How Much Does it Cost to Develop a Fantasy Cricket App like Dream11? 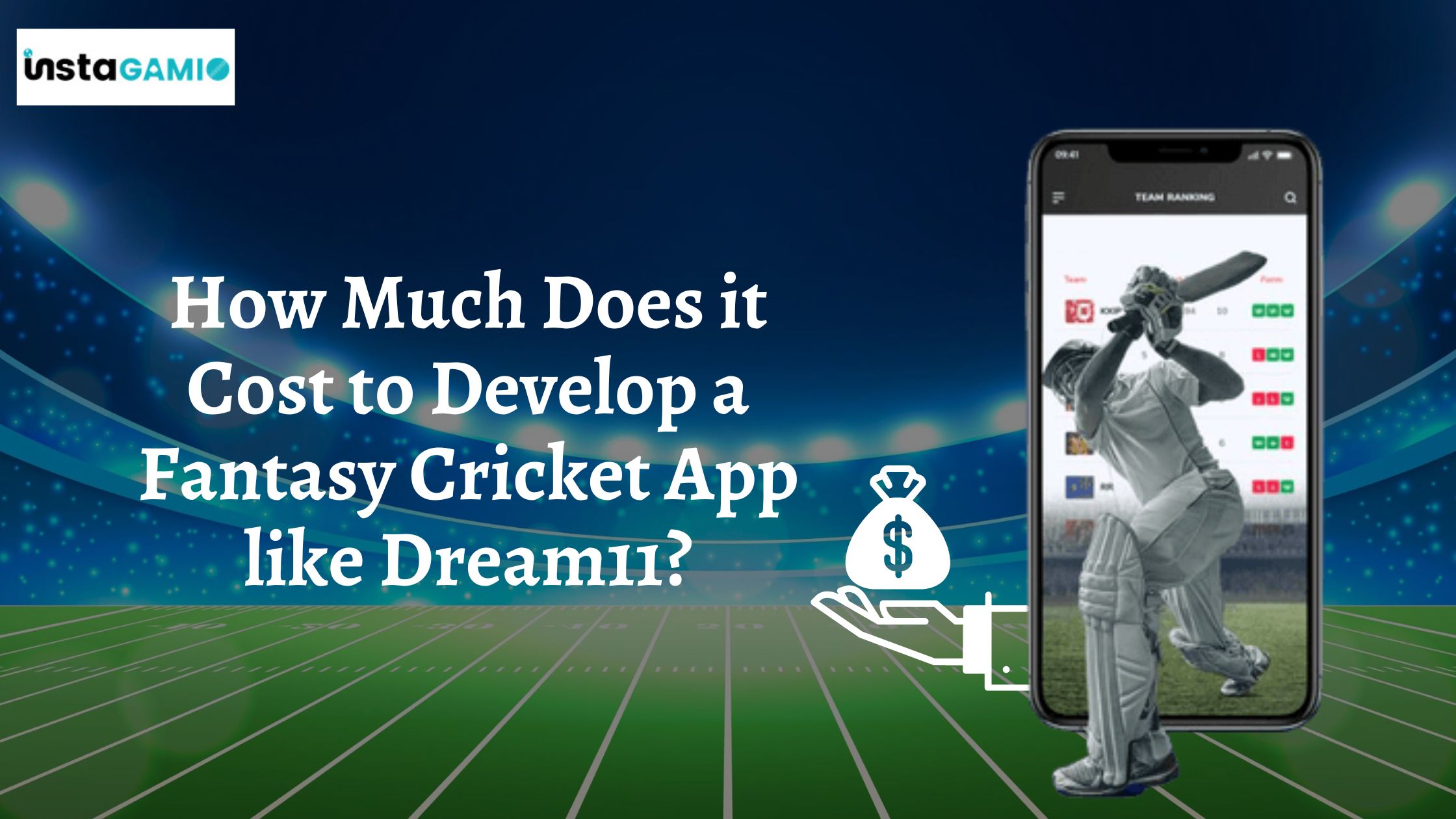 Fantasy Cricket App Development is expanding quickly due to providing a different kind of joy to people who like to play online games on their smartphone devices. The Google Play Store and the Apple App Store, offer a wide variety of programs. A lot of people use apps like Dream11 because of their many appealing and fascinating features.

Fantasy sports genuinely immerse the participants in a virtual game that allows for more creative gameplay. Let’s know more. You will learn about the time and cost estimates for developing fantasy cricket apps like dream11 in this blog.

A Dream11 Clone App Development Solutions such as Dream11 is a kind of mobile application that enables users to participate in games in a virtual setting where they can pick the players, assemble a team, and compete. Based on the statistical performance of players in the actual game, several teams compete against one another on these apps.

It increases the players’ excitement for the cricket match. However, Dream11 offers more sports than just cricket, including the NBA, hockey, football, and kabaddi. Due to the popularity of playing fantasy sports, the industry for developing apps like dream11 is also booming.

It’s important to understand how Dream11 works before you even consider investing in a fantasy cricket app development solution. Finding the ideal Dream11 Clone App Development company for your project won’t be difficult once you are aware of the complexities involved in app development.

How Does a Fantasy Cricket App like Dream11 Work?

In a fantasy sports game, your level of sport and player knowledge is everything. As a result, it puts your ability to predict the player’s performance to the test. To win the game, you must assemble the ideal team.

Download via the app store, which is the Google Play Store for Android smartphones or the Apple App Store for iOS devices.

Install and register by giving the necessary data.

The gamer must use the OTP verification to log in after downloading the program. After that, a window with a list of all the current and forthcoming matches opens. To continue, the player must select a match.

The player must assemble an 11-member squad in this step. To create a team, they are given a total of 100 credits. The gamer must select players from one of these four groups.

When a player clicks on a player’s name, a window with detailed information about the individual’s statistics opens, which the users can use to guide their choice of team members.

The player must now select the captain and vice-captain for their team since they are the ones who established it. This is a crucial stage because it could significantly affect their final grade.

The user will receive two times as many points for the captain. Vice-Captain: For the vice-captain, the user receives 1.5x the points.

Although a person may create up to six teams, they may only use one team to participate in the game.

Up until the start of the game, a player can change their team. Once the game’s deadline has been reached, the team cannot be altered in any way.

When there are no prizes, playing a game is not enjoyable. When a team performs well, it receives a reward that can be divided among the team members. Also, the team with the highest reward is the winner.

Cricket is extremely popular all around the world, so adding a feature that allows players to make money from the game is like striking gold. Dream11 initially explored using advertisements as a monetization approach, but they quickly realized that the greatest experience is one that is quick, streamlined, and ad-free, so they switched to the commission strategy.

The principle of season-based games, team-building, and scoring based on the actual performance of the squad members in the actual match is followed by fantasy gaming apps like Dream11.

Four key factors are vital to any brand’s success as a White Label Fantasy Cricket App type of business model.

Dream11 became a part of the Unicorn club, and the commission it obtained helped to make it stronger. The company receives a portion of the prizes in the form of a commission for each match, with the remaining funds going to the winners. For each sports match prize, a fantasy gaming app must set aside a portion of its net earnings as fees and commissions.

The brand has prompted venture financiers to the fortune of a fantasy game-based app service after observing how its business model has blossomed. With its agreement to serve as the IPL 2020’s headline sponsor, Dream11 earned money for the entire year. You may easily get multi-round funding with innovative fantasy gaming apps.

Dream11 was initially operated using an advertising-based business model that followed a standard seasonal schedule. The company switched to a daily match-based revenue model in 2012 and authorized customers to wager on the teams. Still, a respectable portion of its annual earnings come from advertising.

What are the Features you Need to Add at the Time of Dream11 Clone App Development?

The features you intend to integrate matter the most whether you choose to design a fantasy cricket website or app. If you want to create fantasy cricket software similar to Dream11, you should concentrate on including the best features. Users are drawn to the app by its features.

Here are some important features that a Fantasy Cricket App like Dream11 must have, according to the needs of users-

A fantasy sports cricket app must contain a function for users to create their profile, just like any other on-demand service.

Users must have access to an elegant and simple-to-use dashboard where they can view everything from their performance to scores and forthcoming competitions.

Here, current and forthcoming tournaments are displayed so that people can select the one they want to play in according to their preferences.

Once they have decided which event to enter, they may easily sign up for it by paying the entry fees or, if they are premium members, by signing up immediately.

It is usually a good idea to request that your Fantasy Sports App Development firm add many payment methods, or better yet, every single and available one so that customers can quickly select the one that best suits their needs.

Allowing people to organize their competitions and games with their friends is always a superior idea.

Users of apps like Dream11 can suggest friends and receive a referral bonus for each person who signs up. It is a fantastic technique to draw users in and advertise the software.

Admins should be allowed to establish their profile and save all of their information in the app, just like users do.

To prevent any inconsistency, the administrator must have the ability to monitor the outcomes of any events and the points that each team has accrued.

To enable the admin to keep track of each payment made or received, you can ask your dream app developer to design a distinct dashboard for payment management.

This is a fantastic tool to provide so that administrators may alert users to future games and competitions as well as points and referrals.

The choice of whether to approve or reject a user’s entry into the competition should belong to the user management administrator. There must be a feature that allows users to be properly handled as well.

The process of creating a fantasy cricket app is difficult because there are so many considerations. To prevent any turmoil, the admin must have a way to oversee all the leagues and tournaments that are taking place.

An easy-to-use dashboard that allows the administrator to view all reports regarding leagues and matches, payments, users, and many other topics.

How Much Does it Cost to Develop a Fantasy Cricket App like Dream11?

The cost of Dream11 Clone App Development is from $5000 to $10,000 for a single platform (Android or iOS) with minimal functionality. According to functionality, the price may be more if you want to create a fantasy Cricket App like Dream11 with all the latest features and functionalities and support for many platforms.

You can get in touch with us if you’re looking for a Dream11 Clone App Development company to create a fantasy sports app similar to Dream 11. Our team of skilled technical Dream11 app developers has created several fantasy sports apps.

Never let it be too late! Keep in mind that many others are working on and already constructing an app similar to Dream11 if you have cricket app ideas and continue to consider creating one. And they’re all competing to develop the top fantasy sports software. So, you should also take one step ahead now. The popularity of cricket is also unstoppable, thus the market for fantasy sports software development is still booming. Use this chance to develop your own personalized Fantasy Cricket App like Dream11. Take advantage of the many millions of cricket lovers in our nation and win the cricket season.

Enter your email to receive our team